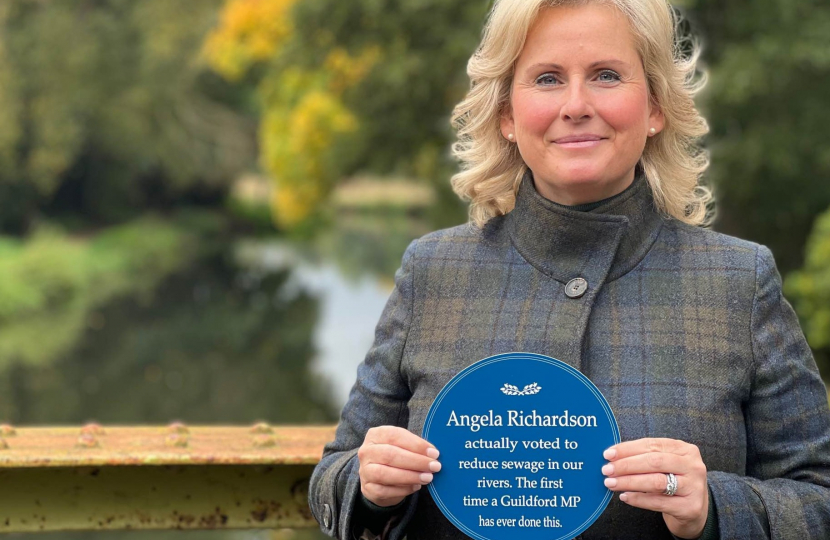 A number of blue plaques have mysteriously appeared across Guildford making various claims about the government and Angela's record on voting to "allow sewage into our rivers".

They are outright lies. No MP voted for sewage to be passed into rivers. The Environment Act clamps down on environmental crime, including the unauthorised dumping of sewage into rivers and waterways and will multiple by 100 the amounts of fines that can be levied against water companies for doing so.

Sewage can *only* be put into waterways when storms strike and fill network to capacity, meaning that if it wasn't released into rivers there would be sewage backing up into people's homes.

During the debate on the bill, an amendment was put forward in the House of Lords to remove this provision and prevent any discharge into rivers and waterways. This would either have meant sewage going into people's gardens and homes instead or a massive, disruptive and ruinously expensive ripping up, expanding and replacing of our water infrastructure such as has never been attempted by any country before. The costs of this in disruption and money would have been passed, at least in part, onto customers.

Angela said: "The government - and myself - all want to see a programme of greater water capacity, fewer leaks and more reliable service to customers. But a demand for the entire water network to be replaced wholesale would not have achieved that. Like gas and electricity networks, expansion has to happen in an ordered and methodical way. I would like to see the government go further in regulation and require of given levels of re-investment in the future.

"Until then, voting against this amendment was the only responsible course. By supporting increased fines and enforcement, I want to see Thames Water reduce the number of discharges into rivers, which cannot all be due to storm conditions, more frequent though they may be.

"Let's be clear - the Conservative government has done more to address sewage in the rivers than any government before it. No Labour government or coalition government proposed the levels of fines or widespread guarantees contained within the act, not just in water but in biodiversity and air quality too. It is a piece of legislation I am proud to have supported; it is hopefully the beginning of more. It is certainly nothing to shy away from in the face of those hoping to win your vote with their misleading blue plaques."