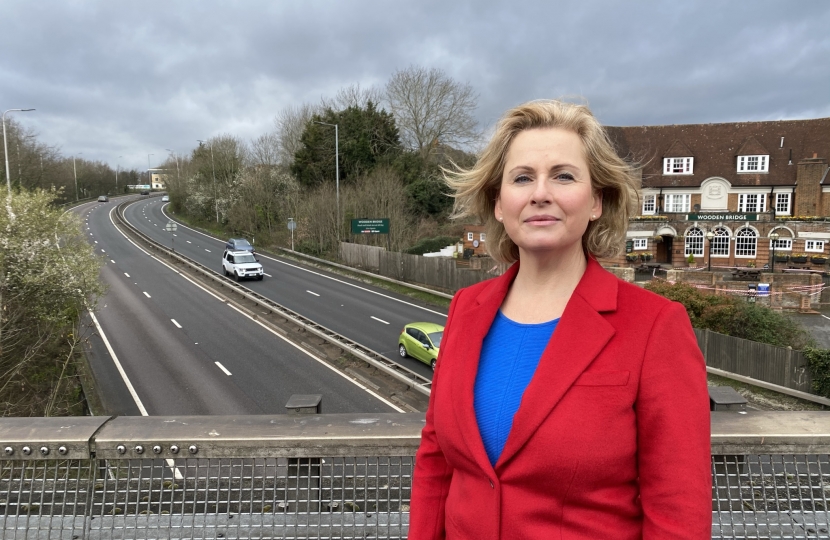 Somewhere vs anywhere. It’s a strong narrative that has helped explain the seismic shift in the way communities up and down the land have been voting since before the Brexit Referendum in 2016. It’s well documented by political commentators and we saw increasing evidence of it play out in this set of election results on May 6th, where council seats in the Midlands and the North turned blue after years of neglect by Labour, coupled with the promise of investment by the Prime Minister in levelling-up, not only in opportunities and jobs, but in shiny new infrastructure. New buildings, new hospitals, new schools, upgrading town centres and high streets.

You could be forgiven for thinking that places like Guildford and other towns in Surrey, where we have lost seats to residents groups and Lib Dems, are populated with the “anywheres” who don’t identify with the same sense of pride in community and place.

Nothing could be further from the truth.

This set of elections was to choose our county councillors in Surrey for another four years.  A strong Conservative record of delivery on services, keeping council tax low, and exceptional local leadership throughout the pandemic was not enough to save experienced councillors like Mark Brett-Warburton in Guildford South East division, former borough councillor Philip Brooker hoping to take over from Graham Ellwood in Guildford East, or even Julie Iles, our dedicated Cabinet Lead for All Age Learning, in the Horsleys division who had worked wonders in improving SEND provision for our children.

There was no tangible evidence of a vaccine bounce, regardless of the marvel that vaccine roll-out has been. Instead, our local elections was fought on borough level planning issues, a hangover from the Local Plan implemented by the Conservative controlled administration at borough council shortly before the May 2019 elections – with massive strategic sites eating into the Green Belt – which saw the electorate remove every single Conservative councillor in the Guildford Borough Council part of my constituency.

That Conservative administration did its noble duty in bringing forward the best plan possible, to consult and find sites with a brownfield first approach to avoid the risk of having development imposed on them by central government which would not reflect the communities wishes – and to avoid building hulking tower blocks that we see in neighbouring Woking.

There is no desire to destroy the historic character of our ancient county town.

The fact was that the local community, though understanding the lack of affordable housing for key workers and those who had lived their entire lives in Guildford and wanted the same for their children, wanted the local plan stopped and voted in a brand new residents group who pledged to stop it.

They have now been in a power-sharing agreement for the last two years with the Lib Dems and, in the job, clearly realise their ambitions are not as straightforward to achieve.

The local plan was agreed with promised road infrastructure for the A3 which runs like a scar through the centre of Guildford, dividing the prosperous South from the North which has communities struggling with deprivation and health inequalities and a difference in life expectancy between either side of the A3 of 10 years. When this main arterial route becomes congested as it narrows through Guildford the surrounding areas suffer from resulting air pollution and gridlock.

We discovered last year that any improvements to the A3 had been left out of the next Road Investment Strategy. In my meetings with Highways England, they have told me there are no more sticking plasters, which is why I am calling for the A3 to be tunnelled under Guildford. It’s expensive, but it’s the least impactful project to the environment and the surrounding valuable landscape which a cheaper by-pass would have to cut through. The successful Hindhead Tunnel to the south shows it can be done, however, any success in getting a hard infrastructure solution like this will fall well outside the local plan period. On this basis, we simply cannot take the number of houses in the plan without decent infrastructure solutions.

The remnants of the Conservative Group on the Council put forward a motion to review the local plan in early April on the basis that vital infrastructure could not be delivered. The new administration has disappointed residents by not taking up this sensible offer and instead say they “plan to review the plan closer to the next set of Borough elections in 2023” whatever that means?

The pandemic brought communities together here. It tightened the warp and weft of our social fabric and it is this social infrastructure that we need to maintain and invest in, in communities like Guildford and our surrounding villages. Planning is a big part of this. To create a sense of place, we need to future-proof our town centres and high streets, make them welcoming, understanding what drives people to want to come and visit, as many in our community struggle to get back and feel secure and safe using them following this last year.

We need to make permanent changes like licensing for outdoor eating and drinking space and re-think how we use retail space so that our high streets aren’t massive and hollowed out but perhaps smaller, welcoming and cocooning, creating quarters that feel micro-local with pubs, bars and restaurants. We need to hold festivals, farmers markets, develop our riverside, and bring our town and gown together with the nearby University of Surrey. Students will find a sense of community equally as meaningful, especially after the disrupted year they have had. Our Culture and Arts is incredibly important to the local economy and they need all the support they can get. The Culture Recovery Fund investment was critical for the future of Guildford and Cranleigh.

Our voluntary community is the solid foundation that underpins success. We need to find ways to make it easier for volunteers to come forward and have the reward of the skills and talents they possess in making a difference to others. There is too much red tape and good people are put off before they even start. We saw this with returning health professionals wanting to help roll out the vaccine and we moved swiftly to change some of the measures and form-filling.

I believe one of the best investments the Government has made for our communities is helping those who are rough-sleeping. The support has been phenomenal and necessary and the ambition to end rough-sleeping one I wholeheartedly endorse.

In the meantime, the government has the ambitious target of building 300,000 homes a year. We do need housing in Guildford, generations of families should not be separated through affordability issues, they are part of what makes the community so strong.

A well-organised group of Conservative MPs successfully made the argument to look again at a housing algorithm that would have seen a disproportionate number of houses land right on our doorsteps in the South East. I will keep working with them to make sure that planning will be fit for what we need in Guildford and surrounds, not something imposed to hit a target, while still trying to fight for funding for the road infrastructure that we have needed for decades.

As levelling-up opportunity is spread to all four corners of this fantastic union of nations, so too should housing development, so that we can all appreciate the value of our own appropriate ‘somewhere’ to take pride in.

This article appeared on ConservativeHome on 14 May.

Sunday was a beautiful day in Guildford and the atmosphere in Stoke Park for the Cancer Research UK Race for Life was amazing. Angela was very moved to hear everyone's individual stories about why they were running.